All You Need to Know About Home Security Solutions

Recent times have seen a substantial increase in the global crime rate. The rising crime rate has resulted in people worrying about their valuables, property and family members. The worry often takes a toll on the mind and can adversely affect an individual’s productivity. Home security systems are a way people can secure their homes and rid themselves of the worry of the safety of their dear ones and their valuables. As the name suggests, safety solutions are nothing but a system installed in place to secure something. A home security system is a set of interconnected components that ensure safety and security of a house. The basic working principle of home security systems involves securing the doors, windows, and other entry points into the house. Components of a Home Security System The typical components of a home security system consist of the following components: A processing unit or control panel which operates the whole system of interconnected components Sensors which are placed on doors, windows, and other entry points in the house Motion sensors: Advanced security systems use motion sensors to detect motion inside and outside the house A loud siren or alarm which goes off when the security is compromised Types of Home Security Systems Home security systems can be classified into various categories based on their basic properties. On the basis of monitoring the home security systems can be divided into: Monitored Security Systems Monitored home security systems are one of the most popular and in-demand systems. The system places a house under the surveillance of professionals. As soon as the safety is breached, the system notifies the monitoring professionals about the situation. The professionals notify the concerned local authorities and also communicate the sane to the homeowners. The system also surveys homes for fires or any other circumstances that can cause danger to the homeowner’s life and property. The system is a perfect pick for people who vacation frequently and leave their house unmonitored quite often. However, one major drawback of the system is that it provides burglars with enough time to get away with a few valuables. Further, the system is more expensive than other versions available in the home security solutions market . Unmonitored Security Systems As the name suggests, unmonitored safety systems do not involve professional monitoring. The system sounds off a blaring, high-pitched alarm when there is an intrusion in the house. The loud alarm notifies the homeowners about the intrusion and also works as a deterrent to prevent the burglar from committing the crime. Also, it notifies the neighbors around the house of the situation who can then inform the concerned authorities. Further, unmonitored security systems are cheaper than their monitored counterparts. The only setback of the system is that it depends on homeowners or neighbors to take action in case of a safety breach. Further, if the homeowners are out of town, the success of the system will depend on the neighbors hearing the alarm and taking the right actions. Failing to take an action will deem the system useless. On the basis of connections involved home security systems can be divided into the following categories: Wired Security Systems Wired security systems are traditional safety systems that have been in use for quite some time now. The security system uses a control panel and wired sensors to detect intrusion in the house. It also uses wired cameras to help in surveillance inside and outside the house. The system works continuously to detect any safety breach. If the system is monitored, the breach triggers the generation of a notification that alerts the professionals monitoring the house. In case the wired security system is unmonitored, a loud alarm goes off alerting the homeowners and neighbors of the situation. The major drawback of a wired safety system is its installation. A lot of preparation goes into laying the foundation for installing a network of wires all over the house. This involves drilling holes and installing sockets. Professional expertise is required when installing wired security systems due to the elaborate and laborious process involved. Wireless Security Systems Wireless security systems are the most in-demand security systems in recent times. The system uses a control panel, wireless sensors, and motion detectors to keep the house under 24×7 surveillance. All the components communicate with each other a wireless channel using a particular protocol. Wireless systems are easy to install and can be put in place without any expert supervision. Further, wireless sensors and motion detectors can be coupled with other smart devices in the house to promote automation. Like, wired safety systems, homeowners can make a choice between monitored and unmonitored services. The components of wireless security systems run on batteries. Therefore, homeowners are required to change the batteries from time to time to keep the system up and running. Further, thick walls and long distances can affect communication between the components of the system which can adversely impact its efficiency and effectiveness. 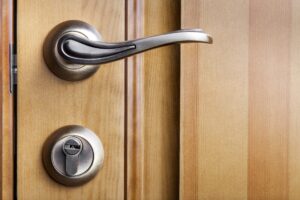 Use Smart Door Locks And Secure Home The Smart Way

Smart door locks are designed and developed by companies as part of the Internet of Things revolution and aim to take away the stress from home security. They accomplish this with the following features. App Integration A Smart door lock depends on an app for almost all of their functionalities. The features of this app […]

Nearly half of the people who use the internet all across the world have been victims of the cyber offense. Every time you open some links or you have clicked the links when you open the email, download any application, and or getting in touch a network always is an opening for hackers to steal […]

Internet of Things or Iot And The Construction Industry

The construction industry for instance, has witnessed an escalating growth over the last few years. And with the IoT technology, the construction job-site industry has beyond the confinements of labor and material management. Today, it includes highly advanced and smart devices such as Gen Z wearables, invariably advanced drones and sensors. The level at which […]